Hi guys, my name is Heath Springman, and along with Cody Rosolowsky, I co-lead the aerodynamics subteam here on the FSAE team. Its been a while since someone posted on the blog, but Cody and I have learned a lot from the information documented here, and wanted to document what we learned in hopes that future aero team members will be able to do the same.

In our first post here, I want start a series to provide an update on the work we did this summer. I'd like to start in the week after competition. At competition, Cody and I made a conscious effort to meet teams, look at cars, and ask questions to other aerodynamics teams. We had compiled an extensive list of notes including features we liked, mounting tips, and manufacturing processes. We started summer by reviewing these notes, and formally documenting them in box. If you want to read these notes, they are located in box (2023>Aero>Resources>2022 Michigan Notes and Pictures). We continued to reference these notes through the year, and recommend that you reference a set of notes like this, and eventually take your own.

At competition, another thing we learned from the design review was the importance of justifying aerodynamics. The one question you can be certain the judges will ask (and is crucial to actually making the car faster) is "Why do you have aerodynamic elements?" We felt we needed hard evidence to justify this, so we began using optimum lap to explore the effects of aerodynamics on the car's performance at a simple level. Using a model of the 2019 Michigan endurance track, we wanted to look at the improvement our aerodynamics made.

To do this, we needed to understand the downforce and drag coefficient of the car brought to competition in 2022. We used Solidworks flow simulation to understand the downforce and drag force, then calculated the respective coefficients. The Solidworks flow simulation were done in accordance with the previous post titled "Aero and CFD". Changes to the process described in that post include running a half car simulation, a change in the model, and using a 9.5 Million Cell mesh. This process was done for the 2022 car with and without aerodynamic elements. With the aerodynamics elements attached, these values were determined to be 1.66 for downforce, and 0.67 for drag.

These numbers were then plugged into Optimum lap, and an improvement in lap time was noticed, going from 145.28 to 140.40 for an improvement of 3.4%. This was enough for us to justify last years aero, and move forward with developing this years package.

Another thing we learned from a judge was a quick hand calculation to validate results like optimum lap. He said that if you are able to determine the percentage of lap you are full throttle, you can determine a ratio between time drag limited and time downforce limited. Downforce increases cornering speed, while drag limited full throttle speed. As a simple relationship, you can accept changes in drag to downforce at this ratio for equal performance across the entire lap. Optimum lap returned the percentage of the lap full throttle as 6.71%, giving a ratio of 1:13.9. Comparing the car without aero to the car with aero, the changes in Downforce and Drag Force are within this ratio, indicating an increase in performance again. We understand that this isn't the most accurate method, and wanted to dive further into the effects of aero.

The next step was to set goals for the 2023 aerodynamic package. We used the batch run feature in optimum lap to continue to analyze the performance of our aerodynamic package. The first thing we explored was "aero scaling". This simulated an increase in the downforce and drag coefficient while maintaining the same ratio. We understood that increase in downforce (good) is accompanied with an increase in drag (bad) and wanted to ensure that making both stronger wouldn't negatively impact performance. After completing a batch run over lots of scaling factors, it was determined that stronger aero would reduce lap time. We set our goal to be 120% aero scaling as we felt it was a reasonably achievable increase. The graph produced from the batch run is seen below.

Next we wanted to look at how changing the Downforce to Drag ratio effected performance. We followed the same procedure using batch runs in optimum lap to produce the graph seen below. Then we found the slope of the "lines of equal performance" to help us determine what acceptable changes in downforce to drag would be. These changes were found to be a ratio of 1:2.333 for downforce to drag. This means if we make a change that increases downforce by 1 N, we can accept a 2.333 N increase in drag and maintain performance. This high ratio is a result of the high power to weight ratio of FSAE cars and the slow nature of the tracks they drive.

Finally, we set 3 more goals in in accordance with reading, our notes from competition, and the previous years package. First, we wanted the center of pressure to be behind the center of gravity at all times, with it begin 10% behind at 40 MPH coasting. This is a vehicle dynamics related goal, as the handling of the car would improve. I can't explain this particularly well, but if you're interested there is lots of reading online about it. Next, we wanted to implement and active aero system which reduced lap time, as it excited us, and motorsports is supposed to be fun! Finally, we wanted the aero package to weight less than 25 lbs total.

Cody and I felt that this was enough to justify our decisions for design aerodynamics this summer, and we now ready to move into the iterative design process, which will be discussed in a post soon! 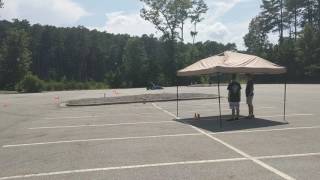